Kimmy Fasani Is Changing the Rules of Snowboarding

How the pro snowboarder and Burton team rider balances motherhood and sending it
October 2019
Fasani is one of the most decorated and talented women in snowboarding, but at this moment she’s a mom with a thousand things to do before she gets out the door. She gathers Koa’s stuff—diapers, puffy one-piece suit, backpack, squeezy food pouches—along with her own essentials: the Burton bibs and jacket she helped design, gloves, goggles, helmet, backcountry tools, green smoothie, and Clif bars. As she and her husband, pro skier Chris Benchetler, load up her truck, she doesn’t say goodbye to Koa. Because he’s coming with them. Read more- https://www.outsideonline.com/2402566/kimmy-fasani-changing-rules-snowboarding

Kimmy Fasani just baked a loaf of sourdough bread and the smell fills her kitchen. Her one-year-old son, Koa, is playing with toys in the living room while she’s bustling about, readying for a day of splitboarding in the backcountry near her home in Mammoth Lakes, California.

Fasani is one of the most decorated and talented women in snowboarding, but at this moment she’s a mom with a thousand things to do before she gets out the door. She gathers Koa’s stuff—diapers, puffy one-piece suit, backpack, squeezy food pouches—along with her own essentials: the Burton bibs and jacket she helped design, gloves, goggles, helmet, backcountry tools, green smoothie, and Clif bars. As she and her husband, pro skier Chris Benchetler, load up her truck, she doesn’t say goodbye to Koa. Because he’s coming with them.

To read more at Outside Magazine: https://www.outsideonline.com/2402566/kimmy-fasani-changing-rules-snowboarding or click the photo above

Raised in Truckee, California, Fasani started skiing as a toddler, eventually swapping two planks for one at the age of nine, when her mom surprised her with a snowboard for Christmas. It wasn’t long before she was stomping backyard backflips and entering competitions. By her mid-teens she’d won three consecutive slopestyle national titles and joined Burton’s roster of sponsored riders. For college, Fasani moved to Mammoth, where she earned a B.S. in marketing and spent 10 years on the contest circuit, before eventually transitioning to filming big-mountain lines for some of snowboarding’s premier filmmakers. In 2016, thanks to a standout segment in Absinthe Films’ AfterForever, both Transworld Snowboarding and Snowboarder magazine named Fasani rider of the year. “I’ve never met someone as tough and determined as Kimmy,” says fellow Burton athlete and three-time Olympic medalist Kelly Clark. “She was one of a handful of women who went after big-mountain riding as if there were no barriers.”

She’s also been passionate about helping other women smash barriers. In 2011, she founded Amusement Park, an annual gathering of freestyle snowboarding’s top women athletes that’s designed to push the limits of the sport. That event, now called Amusement MTN, has since evolved into a yearly three-day backcountry clinic for aspiring professional female riders. On top of it all, Fasani uses her status to raise awareness for climate change as a member of the Protect Our Winters Athlete Alliance.

Given Fasani’s impressive résumé, it’s no surprise that she ended up marrying someone like Chris Benchetler, who, like Fasani, also has a lot going on professionally. In addition to starring in ski films, Benchetler is an artist and designer, doing everything from designing pro-model gear with his sponsors to creating large-scale art commissions. It’d be easy to assume that having kids might never have been on the couple’s road map.

But in January 2017, after her mother died of an aggressive type of cancer at the age of 72, Fasani’s perspective changed. “My mom had wanted us to have kids, but honestly, I was at the height of my career and we weren’t ready,” Fasani says. “But after she died, it flipped me into this different mindset of thinking, ‘What are we waiting for?’”

“I feel like other women need to see that even though it’s not easy, it’s possible.”
KIMMY FASANI
A Star Is Born

After a spring spent coping with her mother’s death—and shooting yet another award-winning film segment in Alaska—Fasani and Benchetler decided it was time to start a family. “I knew when I had a baby that I was going to have to pave my own path, because not a lot of women in pro snowboarding have tried to do this,” Fasani says. “But I was 100 percent in.” She called Burton CEO Donna Carpenter in September 2017, when she was about 12 weeks pregnant. “I had already decided that just because I was pregnant, I didn’t need to retire from snowboarding,” Fasani says. “But still, I didn’t know how my sponsors were going to react.”

Turns out there was no need to worry. “As soon as I called Donna, she said, ‘Let’s do this,’” Fasani recalls. “To have one of the biggest leaders of our sport—a female CEO of a company I’m very passionate about—say that immediately … it made me let go of my guard and realize that me having a baby is not only going to be accepted by the industry, it’s going to be celebrated.”

Koa was born on a stormy day in March 2018, and six weeks later Fasani was back on her snowboard. “We immediately got back into adventuring,” she says. That summer, when Koa was five months old, the family traveled to New Zealand for a month and lived in an RV while they snowboarded and surfed. “I feel like other women need to see that even though it’s not easy, it’s possible.” 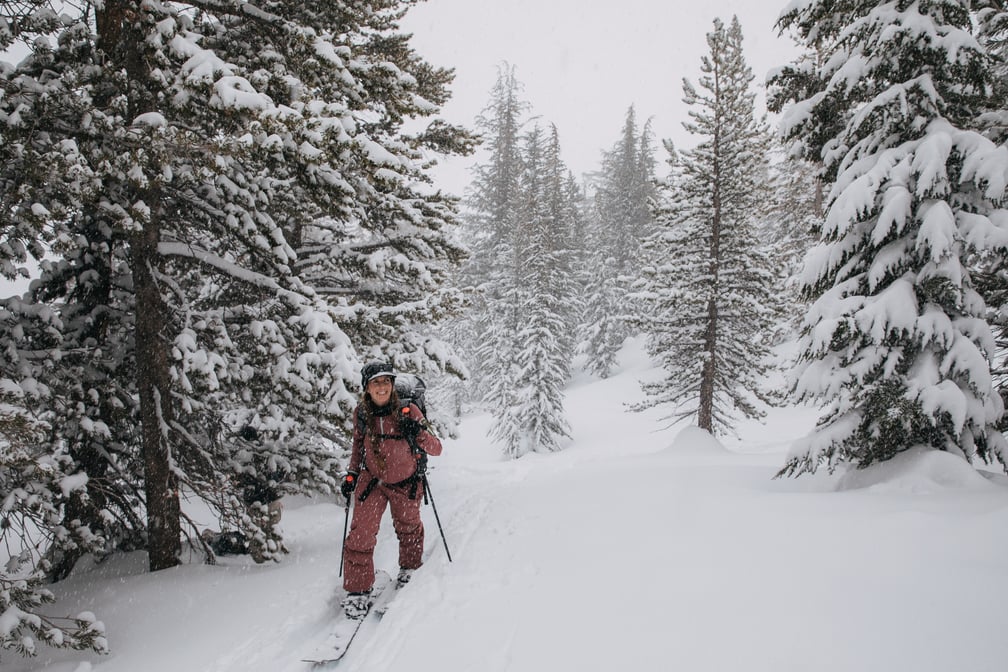 With Koa happily napping in the backpack, Fasani and Benchetler spend the morning touring low-angle terrain not far from their house. There are no rad lines or huge airs today. Instead, once Koa wakes up, they take frequent snack breaks and show him cool trees and tracks in the snow. Sure, Fasani still gets after it—filming segments for next season’s snowboarding blockbusters, developing innovative new products with Burton, inspiring the next generation of rippers—but all of that now fits into a bigger picture. One that centers around raising her son. “This has been the biggest year of learning and adapting and slowing down in my life,” Fasani says. “For that, I’m thankful—because I’ve never experienced anything like it.”